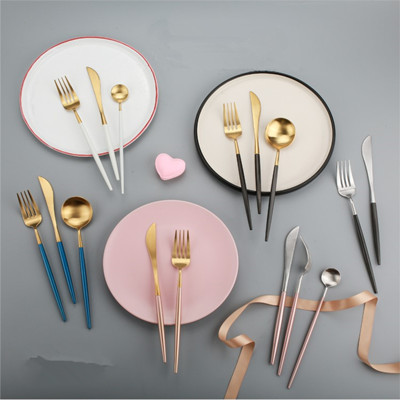 There are different specifications for the knife and fork, and the size of the knife and fork is different depending on the application. When eating meat, use a large knife regardless of whether you want to use a knife. When eating salads, sweets, or some appetizer, use a medium knife, fork, or spoon that varies with the size of the knife. The basic action after cooking the table is to “cut the knife in the right hand and then fork the food in the left hand”. Press the left end of the dish with a fork, fix it, and cut a piece of the size of the dish with the knife on the side of the fork. The fork can be directly forked and sent to the population. Simply put, “press the fork and then Knife cut open.” If the elbows on both sides are too high, the angle of the knife and fork will be too large and it will be in an upright position. Conversely, if the elbow is too low, the knife and fork will fall down, so there is no way to cut the food well. Relax your shoulders and wrists, do not open your arms, and keep the angle between the knife and the plate at around 15 degrees.

It is summarized into 7 points; the sitting is facing the cooking side; the shoulders and wrists are relaxed; the arms are attached to the body; the elbows are not too high or too low; the cutlery and the plate are inclined; Gently move the knife and apply force when pressed. In this way, not only can the food be cut easily, but the posture also looks good. There are also ways to move the knife. First force the fork of your left hand and gently move the knife. Note that the force is not available when the knife is pulled back, but the force is applied when it is pressed forward, so that the food can be cut off. When the elbows on both sides are too high, the angle between the knife and the fork will be too large to cut the food. Knives and forks should not be excessively inclined. The fork can be freely changed according to the characteristics of the food to facilitate the meal. When forked, the back of the fork must be facing down. However, if it is picked up, the fork should be used upwards.

The eating habits of British and American people are different. When eating meat dishes, the Englishman takes the fork in his left hand and puts the fork tip down. The meat is tied up and sent to the population. If it is rotten vegetables, the meat knife is placed on the fork and sent to the mouth. The Americans cut the meat in the same way, then put the knife in the right hand, change the fork, put the fork up, insert it under the meat, don’t dine, shovel the meat, send it to the population, eat the rotten vegetables too. Shovel up and eat. If you have a sauce, you can also use a knife to scrape the sauce, then use a spoon or a miso sauce, and use a spoon to serve the sauce with the sauce. For example, if you fork it with a fork and then use the spoon to mix the sauce and eat it, it is the wrong action. Because of this, when the dish is delivered to the mouth, the sauce will be smashed and smashed, and it will be a mess. When picking up the food with a fork, hold the fork with your left hand and place the food on the fork on the front of the fork to the mouth. In a relaxed occasion to have a meal with a friend, if you don’t need a knife, you can use your right hand to eat a fork.

When the finely divided food in the dish gathers, it can be blocked with a knife and then picked up with a fork. It is also possible to use a spoon instead of a knife. Gather the ingredients onto the spoon with a fork and serve the food in a spoon. When eating a salad, cut a large piece of lettuce leaves into small pieces with a fork. If it is not easy to cut, use a knife and fork. Cut only one piece at a time, don’t cut the entire bowl of salad into small pieces at once. If the salad is on a large plate, use a salad fork. If you put it with the main dish, use the main fork to eat. If the salad is a separate dish between the main course and the dessert, it is usually eaten with cheese and tamale. Take one or two slices of bread on your salad plate and take two or three pieces of cornflakes. Cheese and salad are eaten with a fork and cornflakes are eaten with a hand. When eating asparagus, if there is soup in the asparagus dish to be eaten, cut into small pieces first, then use knife and fork food. If the asparagus is large and requires simmering juice, cut the head first and then separate it to prevent dripping and slag. You can also hold the stem with your hand and eat it with tartar sauce. For small asparagus, you can eat it with your hand. The bean and the bean stick are eaten by hand, unless there is juice in the potato strip, so use a fork. Small potato chips can also be eaten, but it is better to use a fork. If the potato strip is too big to be used, use a fork to open it.

Don’t hang it on the fork and eat it. Put the ketchup on the side of the plate, grab it with your hand or fork it with a small piece of chopped tartar sauce. Baked potatoes are often cut when they are eaten. If not, cut them from the top with a knife. Open the potatoes with your hands or a fork. Add cream or yogurt, cream and small shallots, salt and pepper. a little. You can eat it with your skin. The set tableware can’t be changed at will, but if you are left-handed, you can replace the knife and fork with each other when you eat. Just after the meal is finished, the tableware must be placed according to the method of the right-hander, and the handle of the knife and fork is placed to the right on the plate. The reason for this is that the main thing is to not cause trouble to the service personnel.