How to use the knife and fork to eat steak correctly

Serving order:
In Western food, most of the steaks appear on the menu as the main dish, so in the order of the starter, soup, side dishes, main course, salad, dessert, coffee tea, in order. 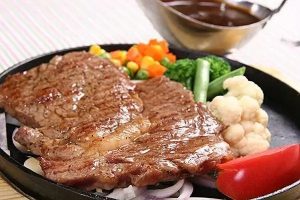 When using a knife and fork to eat, use the knife and fork from the outside to the inside. Hold the fork with the left hand and the knife with the right hand. Straighten your forefinger and press it on the back of the fork; in addition to the same method as the fork, the knife can also hold the joint between the shank and the blade with your thumb and forefinger. According to the food, you can choose the method that is easier to eat.
Press the left end of the food with a fork, fix it, cut a piece of food with a knife along the side of the fork, and then use a fork to send it into the mouth. Note that the force is not available when the knife is pulled back, but the force is applied when pressing forward so that the food can be cut open.
When using the knife, the blade should not be outward. When placing the knife and fork in the meal, the knife and fork should be separated from the left and right, placed on the side of the plate, and the blade is facing itself, indicating that it will continue to eat.
Every time you finish a dish put the knife and fork together and put it on the plate. If it is a conversation, you can hold a knife and fork without having to put it down. When you don’t need a knife, you can also use the right-hand fork.
If you need to make a gesture, you should put down the knife and fork. Do not wave your knife and fork in the air, do not use a knife or fork in one hand, and wipe the mouth with a napkin in the other hand.
When you want to drink or drink, you can’t take the cup with one hand and take the fork with the other hand.
Keep in mind that at any time, do not place one end of the knife and fork on the plate and the other end on the table.