History of cutlery and chopsticks

The most inseparable of modern food culture is chopsticks and spoons. Westerners like to use cutleries. Of course, there are also bowls. The bowl is a concave container. It can be said that before the appearance of the pottery bowl, a lotus leaf can play the same. The role, but for how to eat in the mouth, people at that time are all by hand, especially meat, humans learn how to use before the fire, how to grasp, learn to use the fire, the temperature, you have to resort to tools. 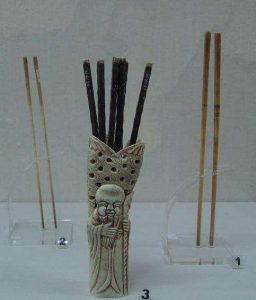 The chopsticks were first called “箸（zhu）”, and the Ming Dynasty was called “fast children”. It was very simple to make. I remember that when I was a child, my grandfather went to work in the fields. When I went to noon, I didn’t go home. I was riding a bicycle and holding the car in one hand. Put a bowl of noodles in one hand and a small bowl as a lid on it, but forgot to bring chopsticks. My grandfather directly broke a branch of a popular, and a pair of chopsticks was made so simple. The fresh branches were also carried. Juice, don’t mention it in your mouth. 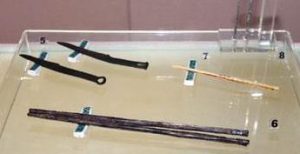 Spoons can be considered as small bowls. In addition to using lotus leaf to hold food, you can also use shells. The smaller shells are tied to a bone, which is the predecessor of the spoon. It appeared about 7000 years ago and appeared together with the farming civilization. Later Hemudu culture, Dawenkou culture, Longshan culture and the discovery of bone spoons, of course, the bones of the Western Zhou period copper spoon has become the mainstream, Zhao Guo invented the “Si Nan” in the Warring States Period, is the compass in the four inventions The spoon is used.

Cutleries have always been the standard for Western food, but the forks were also invented by the Chinese. They are also made of bone. In the Qijia Cultural Site of Gansu Province, which has more than 4,000 years, some bone forks were unearthed, and the Shangchao knife and fork were The spoons has formed a suit, and the invention of the fork may be related to agriculture, that is to say, after the agricultural civilization, the Chinese people in the Song and Yuan Dynasties gradually no longer use the knife and fork. The Mede plastic disposable cutlery manufacturer offers a wide variety of cutlery. 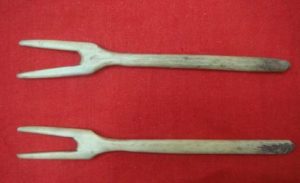 The knife was first called “匕（bi）”, and the “妣（bi）” in the Oracle is the 匕（bi）, the earliest known to be found in Hemudu, and the original 匕(bi), also has the function of a spoon, can also be used to fish food, knife There are many uses, as a production tool, as a weapon, stone, and bone, as the most suitable for tableware manufacturer, and chopsticks can not only be used as chopsticks but also sharp.