Western culture and placement of cutlery 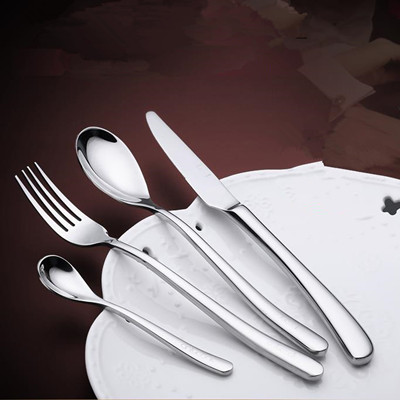 1.The function of the knife and fork is to cut. In the quantitative package, the large cut is made small, and the small cut is made smaller. This non-stop cutting action from large to small cultivates Westerners. Logical thinking from appearance to essence.

2.The cutting of the knife and fork represents the power, is hard, and imposes violence and coercion on the object. For example, fork the food with a fork, force it to be fixed, and then use a knife to violently cut.

3.Knives and forks are metal objects, which are non-renewable resources in the natural environment. Westerners, while satisfying their own needs, express the exploitation and possession of resources, which are profit-seeking and profit-making. The villain practice.

4, the knife and fork is a one-way cooperation with both hands, pay attention to the group to fight the world, advocating team spirit.

Placement of knife and fork

In the dining, it is a figure of eight, if you take a break in the middle of the meal.

There are two ways to place the end of the meal: after the meal is finished, the lower side of the fork can be raised upwards, and the blade edge of the knife is placed sideways with the fork and placed parallel to the plate. The following placements are divided into English and French, but the most common is French. Put the handle into the plate as much as possible to avoid falling off due to touch and the waiter is easier to clean up.

When attending a wedding dinner, no matter how the tableware is placed in the “meal” position, as long as the main guests finish the meal, they should immediately put away all the dishes. Therefore, at the banquet, remember to focus on the main guests.

In the banquet, each dish is eaten with a pair of knives and forks, and the knives and forks placed in front of them are taken inward from the outside. The knife and fork are used up, and the serving is over. When you need to talk or rest in the middle, you should put the knife and fork in a figure-eight flat on both sides of the plate. Conversely, the knife handles are placed side by side on the plate, indicating that the dish has been used and the waiter will remove the plate. For the starter or the dessert, if it is a dish that can be eaten directly with a fork, it is not necessary to use the knife deliberately. For a meal in the family or a light meal with friends, soft dishes such as salads or omelettes can also be eaten using only a fork. However, using a knife and fork on a formal banquet can give people a more elegant and neat feeling.

In addition, in Europe and other places, it is often seen that someone has a fork in his right hand and a bread in his left hand. No matter how neat and elegant you are, this kind of dining can only be done in a family or popular store. In a high-end restaurant, it is absolutely impossible. The knife that has never been used can be placed on the table, and the waiter will automatically take it away.

With the continuous occurrence of public health events such as SARS and avian flu, people are increasingly demanding clean and hygienic requirements for living environment and daily appliances. It is hoped that stainless steel utensils will have the functions of anti-mildew, antibacterial and anti-corrosion, in addition to the characteristics of stainless, smooth and new. Thus, as a new type of material developed by the intersection of materials science and environmental science, antibacterial stainless steel came into being.

Antibacterial knife and fork are mainly divided into coated antibacterial and full material antibacterial. The coating antibacterial needs to be pretreated, such as pickling, caustic washing, spraying with paint film and photocatalyst for high temperature baking. The process is complicated and the cost is also very high, and only the forming sheet is provided to the user, which is not suitable. Used to form vessels and parts.